A new US data study has found that high blood pressure (hypertension) is considerably more common in people with multiple sclerosis (MS) than those without the condition.

Overall, researchers found hypertension to be 42% more common in people with MS, with males over 70 being the most at risk.

Hypertension commonly occurs in people with MS, and it is associated with poorer health outcomes. But studies have previously found contradictory results in terms of its prevalence.

For this study, researchers at Case Western Reserve University analysed electronic health records from the IBM Explorys Enterprise Performance Management: Explore database (Explorys), a multi-institutional database covering 63 million people in the US. From this, data from 122,660 MS patients was compared with that of 37.1 million who didn’t have the condition. They were all matched by age, sex, and race.

The results found a greater prevalence of hypertension in people with MS across all ages, sexes and races. Advancing age correlated with an increase in hypertension across both the MS and non-MS group. In those with MS, it was more prevalent in people in the 70-74 age group. It was also more common in black Americans (28.9%) than white Americans (26.2%).

Researchers also found hypertension was higher in males (24.1%) than in females (21.5%) for both MS and non-MS patients. They suggested the reason for this may be because oestrogen is known to decrease blood pressure, plus females tend to have higher rates of awareness, treatment and control of hypertension. 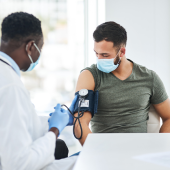