Skin reactions are common in people with multiple sclerosis (MS) who are being treated with oral Mavenclad (cladribine) a new real-world study from Germany has found.

Almost a third (32%) of people studied developed some form of skin reaction after a course of the medication, which is a disease-modifying therapy approved for use on the NHS in England, Scotland and Wales for highly active relapsing remitting MS.

Other known side effects of Mavenclad are headaches, contracting the common cold, and low white blood cell counts which increases a person’s risk of infection.

‘Acute’ skin reactions were the most common type seen, which occurred in the first three months following a course, with 23% of patients experiencing these. People experienced rashes, hair thinning, inflammation of mucous membranes and itchy skin.

Herpes virus infections also affected 15% of people, tending to be those who had low white blood cell counts. Most people that had herpes zoster virus (chickenpox) required hospitalisation.

“In light of the observed delayed skin reactions, we further emphasise the necessity of careful clinical surveillance of cladribine-treated patients for yet undescribed secondary autoimmune events,” the researchers said, and that, “A complete clinical examination of the skin at regular intervals should be mandatory for all patients.” 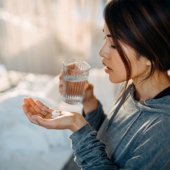 Mavenclad does not stop vaccines working for people with multiple sclerosis