This diet is linked to lower disability risk in MS

A new study has found the Mediterranean diet is linked with a lower risk of disability and reported multiple sclerosis (MS) symptoms.

Researchers at the Icahn School of Medicine at Mount Sinai tested whether adherence to a Mediterranean diet by people with MS would affect disability outcomes.

They looked at 563 people with MS between the ages of 18 and 65 who had completed the Mediterranean Diet Adherence Screener (MEDAS), which records and scores foods deemed healthy on the diet (such as olive oil and vegetables) plus the avoidance of those deemed unhealthy (such as red meat and butter).

The MEDAS scores were compared with other similar MEDAS scores taken from 402 healthy European adults. MEDAS scores range from 1 to 12. By dividing the scores into different ranges between lower and higher – 1-4, 5-6, 7-8, and 9-12, the researchers saw that the higher scores were linked with better MSFC scores, which meant there was less disability, and this was accounting for demographics such as age, race, sex and socioeconomic status. “MEDAS was by far the best health-related predictor of MSFC,” the researchers wrote.

Each point scored in MEDAS was associated with a 15% lower risk for MSFC impairment. Higher scores were also linked with lesser disability in all patient-reported outcomes, with depression having the strongest MEDAS score association.

Overall, the more patients adhered to the Mediterranean diet, the better the outcomes were in terms of disability and functional capacity. The research team wrote that, “better MSFC was most associated with higher olive oil consumption, but also to greater consumption of nuts and wine, and lower consumption of pastries and sugary beverages. Depression was worse among patients who use butter, drink sugary beverages, and consume less fish.” 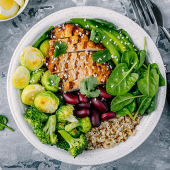